WHY do French Kids Eat Everything? The 411 with Karen Le Billon Karen Le Billon has taken the world by storm with her latest book, French Kids Eat Everything, an expose on why the term “kid-friendly food” actually causes more harm than good here in North America. After living in France for a year, Karen noticed that the French people take a simpler approach to both what and how kids eat. One, she says, we could learn a lot from. Which is why she set out to write about how eating the French way has led to a deeper appreciation for food and even better health in her family. Here we reach Karen by phone in France, to find out more. Enjoy!

BT: Culturally, why do you think it is that here in North America we offer our kids meal alternatives (kid-friendly foods), rather than expecting them to eat what is served? Why don’t they do this in France?

KLB: The French believe that teaching children to eat is as important as teaching them to read. In fact, the teaching process is quite similar in most cases. What does that mean? It takes a while! Children practice tasting and it’s a long process to learn to like dishes and flavors and textures. Yet, this is how children learn to eat a wide variety of food. The French believe that the more variety a child encounters before the age of two, the better, and more adventurous eaters they'll be later on. In France, babies will eat and try lots of things. Of course, they might not like them right away. The idea is that it's a learning experience. One difference I noticed is that in France, they would never label children picky eaters. Rather than labeling the child a picky eater, and offering something safe, they would say the child is learning to eat and to enjoy the flavours of that particular food. A dislike is not treated like a habit or lifelong phase, it’s seen as something kids get over. And we can help them get over it.

BT: So, you’re saying that North Americans tend to give up more easily?

KLB: I think we tend to get easily discouraged. And I’ve experienced this first hand. My kids used to be on what I call the beige diet. They ate pasta, crackers, breads, and a very limited variety of food, because I had labeled them picky. In France, the belief is that eating well is for everyone, not just foodies. Once I adopted this belief, and adopted more patience, my kids now do enjoy almost all foods. It has taken persistence. In fact, statistically, children need to try something seven times before they'll learn to like it. But I now believe teaching kids to eat is the most important life skill you can give them. Our physical and mental health is greatly shaped by how well we eat.

BT: Do you think one factor in the picky eater epidemic is that North Americans are more activity-centric, with a greater focus on taking classes, going to ballet, soccer, etc. and less of a focus on sitting down to eat together?

KLB: Well, I think the difference is that the French tend to view eating as an activity. The most fun activity of the day, in fact. That means that after school classes would never be scheduled at dinner time. People and schools schedule their lives around meals. Society is set up differently in this way. In France, they take Wednesdays off from school so all activities can be scheduled on this day. Statistically, nine out of ten French Families have a meal together every day, while in North America, we're only at one or two families out of ten eating a meal together each day.

BT: No doubt, picky eaters pose a barrier for many parents. But you're also saying there's less of a cultural priority around food here than in France.

KLB: I don't want to make too many generalizations. But it seems to me that we live in a culture that has forgotten the importance of food as a social activity. We're busy- but the French are just as busy with as many working parents. The difference is that we view food as fuel vs. an important activity. To get on with our day, we tend to give kids what they want and then a pattern gets set up where they eat a small amount of things and actually, the kids control the feeding situation. Obviously, there are LOTS of exceptions to this. I think there are other factors, too: We need more education on eating and teaching kids to eat well. I certainly did! However, I really don’t think it would take too much to change things in a more positive direction.

KLB: Mussels and rabbit. They love these.

KLB: No, not really. French food at home is simple. Easy, tasty and fast. The average family only spends 18 minutes more per day cooking than we do here in North America. Most of the recipes in my book that I picked up in France have only four ingredients. The simplicity is very welcoming! And the good habbit of cooking with our kids means they are much more interested in trying the foods, as well! 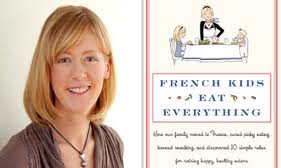 Very true! Great chatting with you Karen. Thanks so much for your time and perspective.