If you find you’re generally adverse to the cutesiness and perfection-seeking that saturates so many of the mommy blogs out there, we’ve got a solution: Dash & Bella by Phyllis Grant.

Phyllis has developed a reputation for keeping it real. She’s a former New York pastry chef, who chronicles cooking with and for her two children, Dash & Bella. The result: a beautiful experience blog that is read by thousands of parents and surprisingly, even non-parents. Dash & Bella includes photos, step-by-step instructions, food preparation tips, her own recipes for cooking delicious meals, and the odd four-letter word. Kid food? No, way. Instead, Phyllis immerses her children in a contagious love of cooking and eating everything, together. Here we reach Phyllis at her home in Berkeley, California.

PG: Two and a half years ago, I started a blog in order to enter a contest at Knopf/Doubleday. The contest involved cooking some Julia Child recipes and then writing about the experience. My post chronicled an epic weekend full of mishaps and lessons learned as we cooked leg of lamb and crème caramel. At one point I even locked my son into his bedroom in order to focus on the complicated recipe. I won the contest and kept blogging.

BT: What made you want to chronicle cooking with your children?

PG: My son has ridiculous amounts of energy. When he was two, I was often in tears saving his life — running after him into the street or grabbing him as he scampered up a fence. I found that the kitchen was the only place that helped him settle down. Not a lot, but enough for me to catch my breath. And the kitchen has always been a meditative place for me so it was nice to (at least try to) share this with him. And when I started posting these stories, I was stunned by the responses from parents and non-parents alike. Some were inspired to try to cook more (with or without kids). Others felt like I was telling their stories and they felt tremendous relief that others were struggling in the same ways.

BT: What advice do you have for parents who—let’s say—don’t find cooking with their kids to be such a lovely experience?

PG: I think it's a mistake to think that it's ever going to be a lovely experience. That's rare! Most of the time it's chaos. Like all aspects of parenting, repetition is key. If you consistently involve your kids in the cooking process, they will know the rules, you will feel more comfortable, and you'll all get into a rhythm. My kids know how to navigate the stove, the knives, the refrigerator. They don't always listen, but there are very few unknowns in the kitchen. This past year, my goal has been to transition away from recipes and I think that's led to both of them becoming more intuitive cooks. They know how to taste, smell, and touch their food. They know what they like and how to get there. 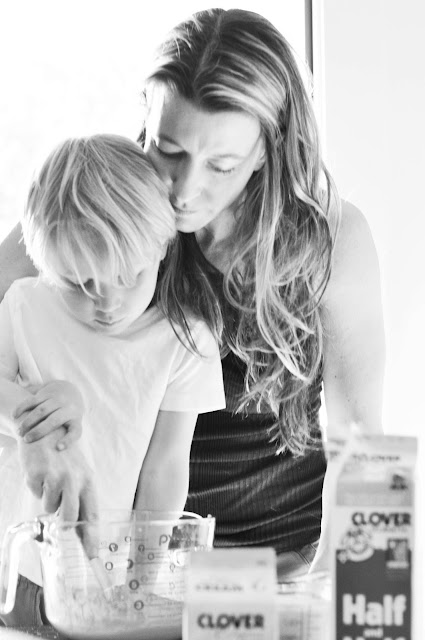 BT: You don’t shy away from complex food activities with your kids. (No “kid food” to be found.) Do you have a particular philosophy on feeding children?

PG: Unless someone is sick, I'm not willing to make a separate meal for anyone in the family. If we're sitting down together, we're all going to eat the same thing. Having said that, my husband and I often eat dinner after the kids are asleep. There are only so many days in a row I can take the intensity without losing my mind (sit down, napkin in your lap, don't kick your sister, it's not disgusting, yes you have to taste it, don't spit it out it your napkin, please). I've said this many times before, but I believe that the most important thing with kids and food is to avoid getting attached to their likes and dislikes. My daughter ate a whole bowl of kale salad last night without a gag or even a look of disgust (a first!). If I had decided that "Bella doesn't like kale" and said it out loud, then I would have reinforced it and then we really would have been screwed. And I love kale and I want to eat it several times a week. Dash, on the other hand, after years of eating everything (anchovies, frog legs, snails), is entering a pickier phase. So I'll just let it all play out and keep on serving him different things with the confidence that it will change.

BT: What’s the most delicious thing you’ve had for dinner lately and can you share the recipe?

PG: Soup. And this is crazy because I've never liked soup before! But oh my god I'm really tripping out on how nourishing it is to cook and eat. A few weeks ago I was having a very stressful evening and instead of sitting around and wigging out, I just dove into making soup. I cooked like a maniac, chopping, stirring, sweating. And I felt so much better. And our bellies were full of everything that we needed.

Phyllis leaves us with her recipe for Potato, Turnip, Kale and White Bean Soup. Enjoy!