There’s a cute trend emerging across BC (and around the world): kids are becoming leaders in the kitchen. Instead of shooing the kids away to cook in peace, we've begun inviting our children in and giving them a meaningful role.  Perhaps we’ve turned a new corner. Yes, we want some space and to keep things as sane as possible, but not at the expense of valuable quality time!

Recently, a whole pile of research has come out indicating a long list of important benefits, both short and long-term, associated with kids who cook.

In addition to quality time, kids who cook enjoy better health, improved academic and social skills, and greater confidence. Some studies show that kids who eat regularly with their families are less likely to struggle with drugs or alcohol later in life. A Public Health Nutrition Study referenced on Science Daily reveals many health benefits to kids who cook. And here in BC, our own research reveals complementary findings. 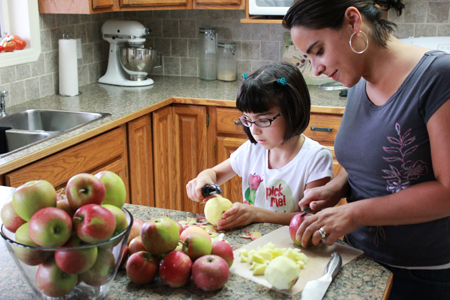 For those of us who need a little visual inspiration, the blogosphere is brimming with family cooking blogs. Blogs like the amazingly sweet & real Dash & Bella by Phyllis Grant and the beautiful Simple Bites by Aimee Wimbush-Bourque come to mind. It's especially refreshing that these parents don’t cover up the struggles and frustrations that accompany life with kids. Like a delicious dessert (and like life in general) there’s often sweetness and a bit of bitterness mixed together. 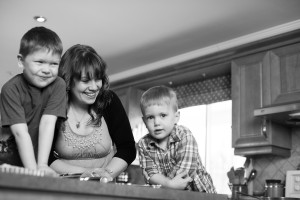 Another adorable visual is the Rainbow Kitchen series, starring a young girl named Hannah Robertson. Hannah is the daughter of Kia Robertson (one of our Hands-on Cook-off contest judges and creator of the Rainbow Kits). She’s actually developed a fan base of kids around BC watching her take charge in the kitchen on her YouTube cooking show. So inspiring! We asked Kia why she encouraged Hannah’s show and she gave us these wise words: “As parents it’s easy for us to just do things for our kids because it’s usually faster, easier and less messy.  But when we encourage our kids to do things for themselves, such as cooking, they learn so much more and take much more pride in what they have accomplished! Another perk of getting kids cooking is that research has shown that kids are far more likely to eat something they have helped prepare."

So true. Anytime a young child makes something themselves, they are much more interested in the food. And speaking of ADORABLE video reminders that show how fun it is to be in the kitchen with friends and family, our Hands-on Cook-off is happening NOW! Hint, hint.

You may be surprised to know that kids can actually learn the same technical cooking skills as adults from a young age. We learned this a while ago when we profiled many of the great cooking camps and cooking schools for kids that have been popping up across BC. Experts like Barb Finely of Project Chef and Chef David Robertson of The Dirty Apron Cooking School and several others we spoke with said that in many cases, little fingers are just as, if not more, capable than adult hands. It’s all in the training.

A good place to start is with a weekly baking day with the kids or to designate one night a week for the kids to take over the kitchen. Let them choose the menu and prepare most of the meal with a little supervision. And, don’t forget to document these precious moments. Grab your camera and share the photos (or better yet, video) with us here!